“The world is full of people who have never, since childhood,
met and open doorway with an open mind.” ~ E.B White

To navigate the complexities of living in a digital world is no easy task, particularly when dealing with children and young people in these spaces. Regulatory bodies and government organisations charged with policing their small annex of the internet rightly emphasise safety and protection but, from experience, young people are not overly fussed with being safe – more often than not they just want to explore. Exploration by its very nature is a potentially risky business and, like all risks has pitfalls and great rewards. Parents are unsurprisingly anxious about the safety of their children and look to educators for guidance and sometimes for someone to blame. Parents are conservative (for the most part) when it comes to their children using technology, whilst at the same time infesting their family’s lives with it in one form or another. So, when parents come to me for my thoughts on Cyber Safety/Digital Citizenship, the message I share is this. 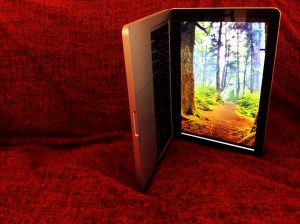 A computer is a doorway. photo by Steven Caldwell

When many of us started with this new-fangled thing called a computer it was a glorified typewriter. Later, with the advent of the internet, it became a powerful tool for connecting via email and for accessing information of varying degrees of veracity on things called web-pages – pages as in pages of a book. Social media has added even more ways to publish the chronicle of our lives but, when you talk to young people as I do computer are more than expensive books for writing in and for reading.

If you think of computers and tablet devices more as doorways than books and you have a different paradigm that clarifies a parent’s role. Whereas books are static – its you, the text and the author’s skill/intent meeting – new devices allow apps and the internet to take children and young people to new worlds where they meet and interact with friends, relatives and ‘randoms’. I mean, we rarely use the term ‘web page’ these days, mostly they are referred to as web sites – sites, as in locations or places we visit. On websites or MMORPGs or shared servers children and young people meet, play, chat, find out, post things and create a world for themselves. It’s this sense of young people doing things by themselves that generally strokes fear in the hearts of parents, but need it?

Just think about it: when children venture outside the door for the first time their earliest steps are taken holding a parent’s hand. Later, on play equipment carefully constructed for some small risk but maximum fun, parents establish boundaries and then sit by the side with a coffee, watching intently well within earshot. Parents allow their offspring to climb, to fall, to run, to test the boundaries, to ask questions and to help pick themselves up when they fall over. (Well, certain kinds of parents anyway.) In other words, they supervise not control the experience. They allow the child to shape themselves in the world. (Of course, some parents put the coffee aside and swing on the swings themselves but that’s a very special kind of parent who chooses to do that.)

So too, computers are doorways to a wider world and just as you would not let your child venture unsupervised on play equipment or out onto the street, parents are at their best when they are on being on standby rather than occupying stand over tactics. Practically, this means establishing boundaries, being with the child, seeing what they are doing, where they are ‘going’ but not monitoring their every move. It is crucial for children to begin to discover their own boundaries, rather than rely solely on those imposed upon them. Be warned, the short term gain of ‘controlling their lives’ becomes a long term ‘loss of trust’ as they age. Are you as parents willing to risk that?

So instead, have conversations. Play the games with them. Keep the technology in the family room not the bedroom, thus indicating clearly that what you do with the device is part of the family. Ask about the friends they are chatting to on Skype or Facetime but don’t intrude. Ask to be taught how to do something not out of a desire to spy but to celebrate awesomeness in general. Just as parents can’t play on the equipment for them, let children develop their own curiosity and power to explore, knowing that you are there to share their adventures rather than to inhibit their curiosity or worse, drive it underground.

When you see computers as a doorway to the world, your family has the possibility of going on a journey together.