The School of (Web 2) Morrow

‘I am reluctant to decide by myself what is important for you to learn because I believe that the most important aspect in learning is to choose what is worth learning. If I alone make that choice, every day I would be reserving the most important part of learning for myself.’ Dr Marshall Rosenberg – Life Enriching Education p 81

In an affluent wooded suburb of New Jersey only a short car ride from the towers of New York City, is the Morrow mansion. Since 1930 it has been known as the Elisabeth Morrow School. The ancestral home of the Morrow family is now at the centre of a complex of specially outfitted school buildings that cater to the needs of 460 co-education students aged from 3 – 14.

It is a remarkable school in many ways. The facilities are outstanding, despite the necessity to adapt a sprawling ‘country house’ into assorted classrooms and offices. Their experiential science space is a notable highlight – it invites play and personal inquiry across multiple scientific domains. Not least of the reasons the school is remarkable is that it bases its entire philosophy on four keystone concepts that it terms ‘The Four Cs’

Learning from the wise

Marianne Malmstrom (aka Knowclue) is a technology teacher committed to engaging students in dialogue between these Four Cs and access to emerging social technologies. (I have written about her before in a previous blog entry.) She empowers her class to use safe and proactive practices online. Her method is simple – let the young people share what they already know and deeply value their contributions. In essence, she impeccably models the Four Cs in her interactions with young people.

At the time of my visit the school year had only recently commenced, so there was still much to learn about the students’ Internet use. Marianne surveys the class’s opinion and experience: on this occasion, she allowed me to frame the questions. Whilst the questions themselves, based around their online identities and eCitizenship, produced some interesting responses, it was a rare unplanned discussion that gave us a startling insight into young people’s attitude to online safety at school and at home.

As we were conducting the survey, it struck me that these students had no idea who I was or, for that matter, could I be trusted. I interrupted the survey and asked them, ‘How do you know you can trust me?’ They were initially troubled (one student said, ‘Oh, you are creeping me out!’) but then increasingly engaged as they explained why they felt I could be trusted. I scribed their responses in a diagram so that I, a visual learner, could best understand the data. This is a more refined version of the same diagram. 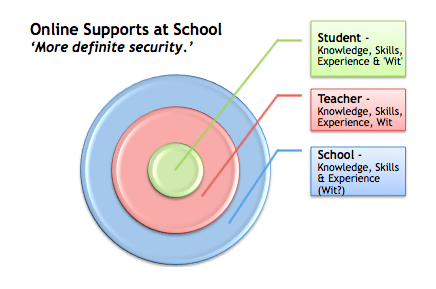 The students identified that they possessed specific Knowledge about online safety, Skills with the tools and, most originally, ‘Wit’ which I took to mean cleverness, humour and a sense of perspective. I suggested, and they agreed, that they also had the benefit of Experience. In turn, they knew that their teacher also possessed Knowledge, Skill, Experience and Wit which informed her choices. This understanding was then extended to the school. In summary, the students could trust me because all these factors would have filtered out anyone undesirable from entering the environment.

We then turned to look at the home environment to see if there was any difference in their perception of safety. 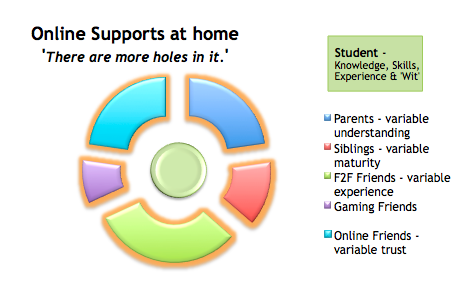 This diagram had less layers, more components and more ‘holes’ as one student put it. Firstly, the students identified differences between Face to Face (F2F) friends they also meet online and purely online friends (their ‘Peeps’) which was revealing. Interestingly, they cited Gaming Friends (World of Warcraft Guilds were mentioned specifically) as a separate category. Membership to these groups, it must be said, s not mutually exclusive. Siblings, they noted, had differing degrees of understanding about online safety practices due to age and education. Parents seemed to monitor their Internet use less than teachers did at than school. The lack of connection, as indicated by the orange highlighted gaps in the model, is indicative of the lack of communication or even exposure to the various aspects of a student’s online presence. Do parents or siblings know to what extent a child participates online? Is there open discussion and sharing? For that matter, do teens invite such interest from family members?

My reflections on this diagram are in accord with the recommendations put forward by Susan McLean in Australia. Four of her five top tips for safety online relate specifically to the whole family being united in discussing, knowing and planning for how the Internet is to be part of their communal and private lives.  (see previous Blog post Generation Next – the Next Menace.)

I then asked the students to tell me the questions they should have been asked in the survey. Their questions were insightful and reflected their need for guidance and support. Here are their unedited questions –

These questions prompted the following interchange between  myself and a student that is worth reporting.

Mr Caldwell: ‘Young people don’t really need teachers at all; they just know so much anyway. Young people like you, you are so wise –‘

Mr Caldwell: ‘To help…so we can help you see your own wisdom.’

What an amazing opportunity to hear the voice of young people and learn from their wisdom!

In a world in which children and young people are increasingly part of global online communities, a school’s Student Code of Conduct is being rewritten to reflect that shift from a purely school based environment. The Four Cs at Elisabeth Morrow School are increasingly becoming the ‘portable property’ of each student wherever they travel – whether in the physical or virtual world.  Whilst the reality of the Four Cs implementation is clearly apparent in the technology rich classrooms, the written policies have yet to catch up but are on the revision agenda.

Elisabeth Morrow’s Four Cs could be a global template for building positive connections online. For this to occur, however, schools may need to revise student Codes of Conduct to reflect the undeniable fact that students have existing online identities with associated behaviours. The Internet is no longer just an electronic library – a respository of facts. The internet is now an interlinked series of Places of Participation that encourage the creation of online identities through which one can gain and add information an any number of ways.

This brings us to the issue of control and security. At Elisabeth Morrow, the students feel safe and supported but want the opportunity to explore further. We need to respect that request. In order to enact the Four Cs fully we need to be understanding of the fact that young people need to take risks and that they need to make mistakes, but do so in a supportive environment. This shows consideration for their adolescent need to push boundaries. That said, no one would argue for putting young people in significant risk: I am not an advocate for no filtering of internet content; that would be akin to putting your child in the drivers seat of a Ferrari without a seat belt, license or driving lessons and handing them the keys. Instead, Marianne Malmstrom and I argue that if we do not engage students in active discourse around controversial content we are not making them more secure, rather we are enfeebling their ability to make informed choices apart from adult intervention.

I would suggest that schools take a more relaxed approach with regard to network administrators blocking Internet content but at the same time, increase the implementation of programs that empower students to critically evaluate content and engage in more proactive self-monitoring. This is a trend that is emerging at Elisabeth Morrow and, as such, is setting a standard in the United States.

Lastly, if students were to enact the Four Cs online they will be, in turn, adding to the societal norms of online spaces. By keeping them out we deny knowledgeable, skilful, experienced and witty young people the opportunity to challenge the existing paradigms. Were young people to bring the Four Cs to bear in online spaces with commitment and consistency, we may, in time, have a very different Internet. This would be the lasting legacy of the true School of Tomorrow.