Love the Lichtenstein. Shame about the Wifi.

‘Librarians are at the heart of opposition to foolish, dangerous, misguided attempts at censoring human expression in our free country…’ Author, Clyde Edgerton 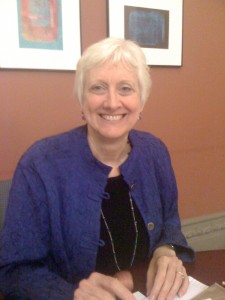 School Library System. As part of her role she is responsible for developing a Grade 1-12 Digital Citizenship curriculum for implementation in 75 schools in the city. Or is she? If you read below you’ll discover her innovative way to construct and implement this program in New York City. You’ll also read of the twin enemies at the gates of change – Time and Administration.

Barbara took time from her busy schedule to meet with me in a space dominated by an enormous, somewhat distracting sculpture by Lichtenstein to discuss the role of public libraries in developing eCitizens of today and tomorrow.

What is a library in the 21st Century?

There is a great potential to turn around the common misconception that libraries are just storage facilities.

Barbara’s vision is to see libraries become Cultural Community Centres focused around learning and the development of potential. In this model, students engage in active discovery and produce materials inspired by their imagination.

Most significantly, Barbara believes that libraries should become places of provocation where different perspectives are debated and pushed against because, in her philosophy, learning is a social endeavour that requires challenge to ideas for learning to be truly significant. Schools, therefore, could become places for the debate of knowledge, akin to the role of the agora in ancient Greek city-states.

The challenge to this Vision

Barbara is of the view that social media tools have not added significantly to the arena of inquiry and debate.

Whilst she acknowledges the usefulness of these tools, she believes they can be misused in the name of education. Yes, tools such as Twitter, Facebook Instant Messaging and even Blogs allow students to connect with each other but do so only on one level of conversation- the social domain. Even when such communication extends beyond social chitchat, the products are short non-penetrating pieces that have little synthesis of ideas.

I presented to her the work of English linquist David Crystal who is an advocate for a new approach to the new phenomena of Textspeak (used in texting, tweets and IM). In his seminal book, How Language Works he successfully places the Textspeak within the continuum of written and spoken language. Textspeak is a creative innovative medium that invites originality. Regarding the uptake of the form amongst younger people he says,

It is patently a special style arising out of the pressures operating on users of the medium, plus a natural desire (especially among younger –or younger-minded – users) to be idiosyncratic and daring.’  P 157

Barbara is now curious to read Crystal’s work, however, she remains concerned that we have yet to see evidence of these tools or this new ‘language’ leading students beyond superficial responses. In an educator’s enthusiasm to throw innovative technology at our students we sometimes fail to equip them with the skills that allow students to process information, reflect upon what they have read and then create something that will be of benefit to themselves and others.

Barbara sees that when students research online, they tend to do so laterally – only finding repetitions of information that confirm initial findings. There is little effort to discover contradictions or alternative perspectives on issues and then come into some relationship with the tension that arises between these contrary positions.

When it comes to publishing, Barbara believes that students extend this uncritical attitude to their own work: therefore, my opinion is just as valid and true as anyone else’s because it is published on the web. The Cult of the Amateur, though providing voice to students is not helping them say much of any depth, particularly when locating solid evidence is not valued.

How do we encourage a more critical, reflecting attitude?

Educators have an obligation to challenge attitudes about knowledge and knowledge creation. In a global world it is easy to just listen to the local, the familiar and the comfortable because it requires less effort. More effort is required when challenged to chart one’s own path through the many diverse opinions available at our fingertips.

An effective digital citizen is one who seeks out and develops a relationship with alternative perspectives whilst also being connected to their own core values and beliefs but still maintaining a willingness to be challenged.

Barbara has created a methodology that incorporates a respect for diversity and incongruence, which can be applied to any research task. It poses a fresh way of accessing and evaluating information.

It begins with connecting our understanding of the general field to which our findings might relate once we have conducted the research. This leads us generally to wonder about these fields, locate some key terms to help direct our attention. The next three steps are pretty traditional research stages with the additional refinement of the need for real audiences for the finished product. Though it appears as the final step, Reflection is not a final step at all. Reflection underpins the entire process and is done at each stage of the process. 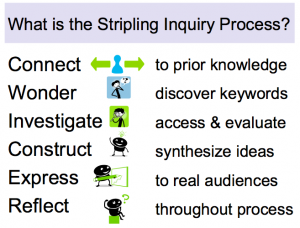 Barbara says that her ‘internal mantra’ is ‘does this teach a child to think’? Her inquiry process aims at doing just that – inviting students to contextualise their learning and reflect on its value. She believes that this model allows students to actually think about what they are discovering rather than just repeat what they have found.

Barbara and her team have laid out a comprehensive Digital Citizen ship scope and sequence for New York City’s schools that encompasses Grades 1 through 12. The curriculum is structured into two strands Safety and Responsibilities that spiral through each of the grades. This is to both acknowledge school administrators necessity to monitor Internet Safety and to challenge the predominantly fear-based discourse at the same time by indicating that students are active participants in the community and, as such, have certain responsibilities.

The program is remarkably similar to the Australian resources produced by ACMA– they even share common resources. The innovation lies in the manner in which the curriculum is being constructed. Rather than have it written by District level consultants, the plan is to invite classroom teachers to apply for a grants. As part of the grant, teachers receive training, a flip camera, a digital projector and a Netbook. In return, they write and deliver demonstration lessons on one of the content areas. The student products of these lessons, small Common Craft style animations, will then be hosted on the department’s website as a future resource. These are a simple way for students to develop conceptual understandings around the concepts of Safety and Responsibilities.

This pilot program has novel approach and it will be interesting to observe the results. The benefits are that teachers are rewarded for best practice and for adding to a larger community pool of resources. Students are presented with a high-stakes audience to present their findings to.

I did perceive some potential areas of growth in the curriculum. Despite Barbara’s best intention to challenge the Fear based paradigm, the program lacks the strand of Possibilities – what is possible by connecting with others online. This moves us beyond just beyond the technology and into its purpose – to connect people and ideas. I would argue for a stronger component on what is possible if digital citizenship were embraced effectively.

Also, looking over one of the sample lessons for Grade 9 I about digital identity I was troubled by the strong moralistic judgments students were being asked to make about their own identity and the identity of other people. Depending on the level of discussion and reflection, this moralistic language would be problematic as it might suggest that only certain expressions of identity were acceptable.

The real roadblock to change

Despite the pilot initiative due to roll out in November, there are some significant blockages already in place that will inhibit its effectiveness.

Barbara says that ‘the infrastructure is hurting’ meaning that the school systems do not have the bandwidth or the capacity to handle even the amount of internet useage being attempted now let alone that which is planned for the future. Schools do not have the capacity to store and share the files the students will be creating in this program. Not only this, students in the NYC district schools do not have email addresses and will not for another two years which will impede their ability to share products.

Ironically, members of her team will be leading a professional development conference on the educational uses of 21st technologies but are unable to find computer labs suitably equipped to do so in the district. How can we teach about the technologies without the ability to demonstrate it? Time is running out if the department wants to share the value of emerging technologies and help NYC kids become leaders in digital citizenship.

What it all comes down to is funding. There have been significant budget cuts as administrators come to the ill-informed view that as ‘everything’ is now available online, libraries are an unnecessary extravagance. This has lead to the closing of numerous school libraries across the city. In some schools there are no libraries at all! Though there was no evidence available during our discussion (we could not access the erratic WiFi system to confirm, funnily enough) Barbara believes that the very schools that need libraries – those from lower socio-economic groups with poor retention rates and low-level literacy – are the ones that are facing library closures.

It is not, however, a totally bleak picture. The Heart of American Foundation is one philanthropic organisation that approaches large corporations to fund and renovate libraries in need. Their READesign program has assisted hundreds of libraries across the country in setting up new facilities and collections. They even provide free, quality, new books to children who attend the inauguration of the libraries. In some cases the seven books a child receives are the only books they have even owned. 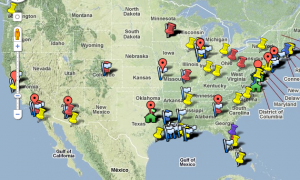 Google map of libraries renovated by the Heart of America Foundation

But these are remarkable exceptions to a growing trend in downsizing and reducing the role of libraries. When asked if there were plans to develop the infrastructure more wholeheartedly as part of the ‘No Child Left Behind’ initiative, Barbara wryly remarked, ‘We are all left behind here.’

On my way out, Barbara pointed out (not that it needed to be pointed out) the remarkable sculpture that had drawn my attention upon arrival- an original Roy Lichtenstein. Far be it for me to challenge the meaning of art (Lichtenstein is one of my favorite artists) but I wondered how many miles of broadband cabling, WiFi hubs, quality novels or computer labs for schools it might provide were it to be sold? 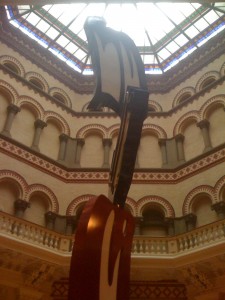 Nothing to fear but fear itself